Primary Sources are documentary evidence of events as remembered by the people that experienced. There are a wide variety of sources that can be label "primary" such as: 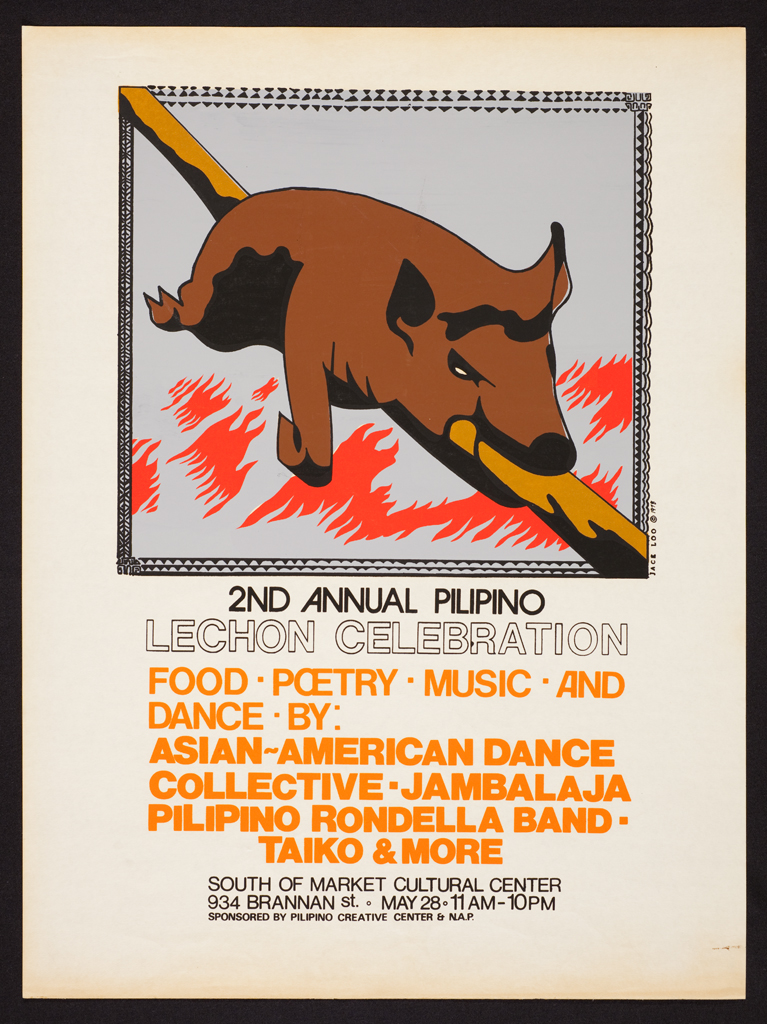 Sometimes, a secondary source (a source that analyzes primary sources to understand why a phenomenon happened such as scholarly articles published in academic journals, research books, biographies, textbooks, etc.) can be treated as a primary source depending on the context of your research. For example, if you are doing a research study about how biology teaching has changed through time, then biology textbooks are considered a primary source.

Primary sources can be found both in libraries and archives. Many have been digitized and accessible online while others are only accessible by visiting an archive or getting a print book at the library or through Interlibrary Loan. Explore the tabs on this page to see where and how you can find and access these sources!

Caption: "2nd Annual Pilipino Lechon celebration" (1978) Collection: Kearny Street Workshop Archives, at UC Santa Barbara, Library, Department of Special Research Collections. Source: Calisphere
The UCSB Library, as well as the rest of the UC campuses, hold rich collections of archival materials from Latin America, the Caribbean, and Iberia. Some collections are accessible physically at UCSB Archives and Special Collections while others can be accessed online through the Online Archive of California (where you can search for finding aids) and Calisphere, the portal to digital collections from California's libraries, archives, and museums.

Tip: Some books are considered primary sources. To find them, check out the Finding Articles, Books and More tab for instructions!

Not all archival collection is available online so it is important to check the finding aids first to determine if the archive have what you want to access.

Explore these resources following the links below:

Primary Sources Databases!
UCSB archival collections!
Maps are also considered a type of primary source and UCSB Library has an excellent Geospatial Collection. There are also other sites on the internet that offer digital versions of maps from around the Americas and around the world. Check the resources in this page to find more about these resources.
Check this research guide on how to find maps, air photos, and geodata, and how to contact the Geospatial Librarian, Tom Brittnacher to set a research appointment!
International organizations such as the United Nations also offer maps & geospatial data free of charge. Check the following resources:
Current news stories are considered primary sources since they report on people and/or events from an "eye-witness" perspective (a reporter describing an event; interviewing bystanders or people that were part of an event).

Below is a list of databases that you can use to find current news in your topic:

Local News from Spain and Portugal:

Newspapers are a type of primary source. Many archives have newspaper collections, and some of them have even been digitized and may available online. Depending on the context, the time that the news was published, and the type of account (chronicles, editorials, etc.) a newspaper account can be considered both a primary and/or a secondary source. Check with your professor before using these resources.

As any primary source used for historical research, be aware of the strengths (first witness accounts) and weakness (bias, forgetfulness, sensationalism) of this type of source.

The Foreign Relations of the United States series presents the official documentary historical record of major U.S. foreign policy decisions and significant diplomatic activity. Below is a selection of several of the series available on the site that focuses on Latin America, the Caribbean, and Spain. Visit their site to see the whole list.
The Indigenous peoples of the Americas constitute a wide variety of people with distinctive cultures, languages, and traditions. What we called "archives" originally were collections of records created by the different imperial powers (Spanish, Portuguese, British, French, and later on the United States) for particular reasons such as documenting these new conquered people, administrating their labor, and tributes, etc. Artifacts were also taken from indigenous people to Europe and became part of imperial museums. Prior to the Conquest, indigenous groups created different ways to document their history such as painted books (also known as codices), murals, sculptures, and other stonework to tell the stories of their rulers, their religious practices, holy days and calendar, etc. After the Conquest, many of these artifacts were lost or scattered all around the world in museums and private collections.

Today, we are able to get access to these materials through the efforts of librarians, archivists, and museum curators who have worked with different organizations to photograph and/or digitize these collections. Below is a selection of online collections available for research.

Mesoamerican codices refers to pre-Colombian folding books made out of tree bark, deer hide. These books were used by different culture in Mesoamerica by Aztec, Mayan and other indigenous groups to record religious rituals, and historical events. There are also Post-Conquest codices created by (or in collaboration with) indigenous people that combine Pre-Hispanic iconography with European aesthetic and book making techniques.

Few of these unique primary sources had survived today but the ones that survived have been digitized and made available freely online. Here is a selection of codices that you can use for your research:
This is a selection of UCSB databases and Open Access digital archives that contains primary sources from Spain and Portugal
Today, the web contains many archival and rare books materials that have been digitized and are freely available online. Below is a list of some of the best databases and sites to search for primary sources online

This is a selection of UCSB databases and Open Access digital archives that contains primary sources from Latin America and the Caribbean. Most content is in Spanish but some are available in English
Today, the web contains many archival and rare books materials that have been digitized and are available online. Below is a selection of databases and sites to search for primary sources online

UCSB's faculty, staff, and students have free and unlimited use of the Center for Research Libraries (CRL) collections, available for extended periods via Interlibrary Loan or immediately through their digital collections. CRL supports advanced research and teaching in the humanities, sciences, and social sciences by preserving and making available to scholars the primary source material critical to those disciplines. They have print, microfilm, and digital holdings. Geographical coverage: worldwide. Great place to find Latin American, Caribbean, Brazilian, and Portuguese collections from around the world!
Copyright © 2008-2019 The Regents of the University of California, All Rights Reserved.
UCSB Library (805) 893-2478 • Music Library (805) 893-2641 • UCSB, Santa Barbara, CA 93106-9010
Contact Us • Policies