Resources about Hispanic Americans Experience in the United States

Hispanic American, as well as, other terms such as Latino/Latina, are umbrella terms, meaning that they represent a wide variety of people and nationalities embedded in one term. It is used broadly to include the descendants of people that migrate to the United States from the Americas, e.g. Cuban, Puerto Rican, Mexican, Brazilian, Salvadoreans, etc. The most recent term, Latinx, not only refers to ethnicity but also to gender identity. 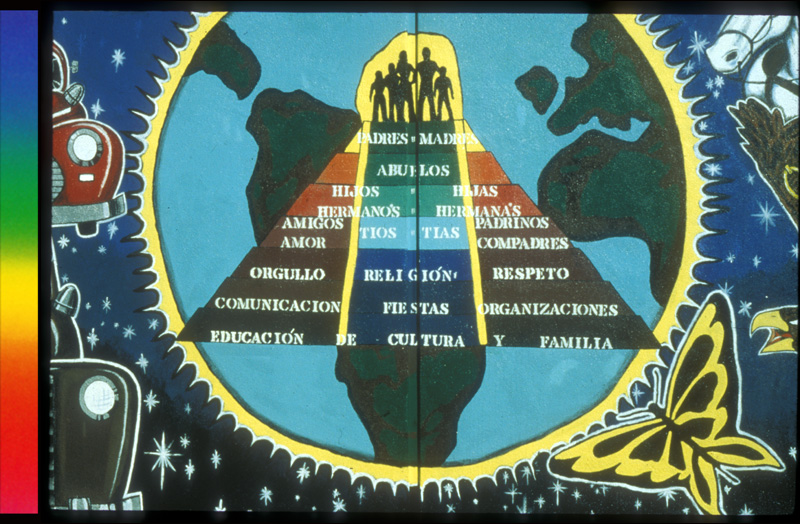 "Each year, Americans observe National Hispanic Heritage Month from September 15 to October 15, by celebrating the histories, cultures, and contributions of American citizens whose ancestors came from Spain, Mexico, the Caribbean, and Central and South America.

The observation started in 1968 as Hispanic Heritage Week under President Lyndon Johnson. It was expanded by President Ronald Reagan in 1988 to cover a 30-day period starting on September 15 and ending on October 15. It was enacted into law on August 17, 1988, with the approval of Public Law 100-402.

The day of September 15 is significant because it is the anniversary of independence for Latin American countries Costa Rica, El Salvador, Guatemala, Honduras, and Nicaragua. In addition, Mexico and Chile celebrate their independence days on September 16 and September 18, respectively. Also, Columbus Day or Día de la Raza, which is October 12, falls within this 30-day period."

Photo Credit: Armijo MEChA Mural. Politec acrylic mural on the wall of Armijo High School's administration building, Fairfield, CA. The panel features a pyramid of values before a globe, and lowriders on the left side.

Hispanic Americans are an integral part of California history, economy, politics, and culture! UCSB Library and Archive have created wonderful exhibits highlighting their presence in the state. Please visit these exhibits to learn more about history and contributions!
The UCSB Library has many resources available with the latest research related to the Hispanic American experience in the United States. Below are some selected databases to get you started on your research! Check the tab Finding Articles, Books, Films & Music for a complete list of databases that you can use to do research about Hispanic/Latina/os in the U.S.
Every year the U.S. Census Bureau and the Pew Research Center release articles and statistics related to the Hispanic populations as part of Hispanic Heritage Month. Check out below the most recent reports!
Copyright © 2008-2019 The Regents of the University of California, All Rights Reserved.
UCSB Library (805) 893-2478 • Music Library (805) 893-2641 • UCSB, Santa Barbara, CA 93106-9010
Contact Us • Policies