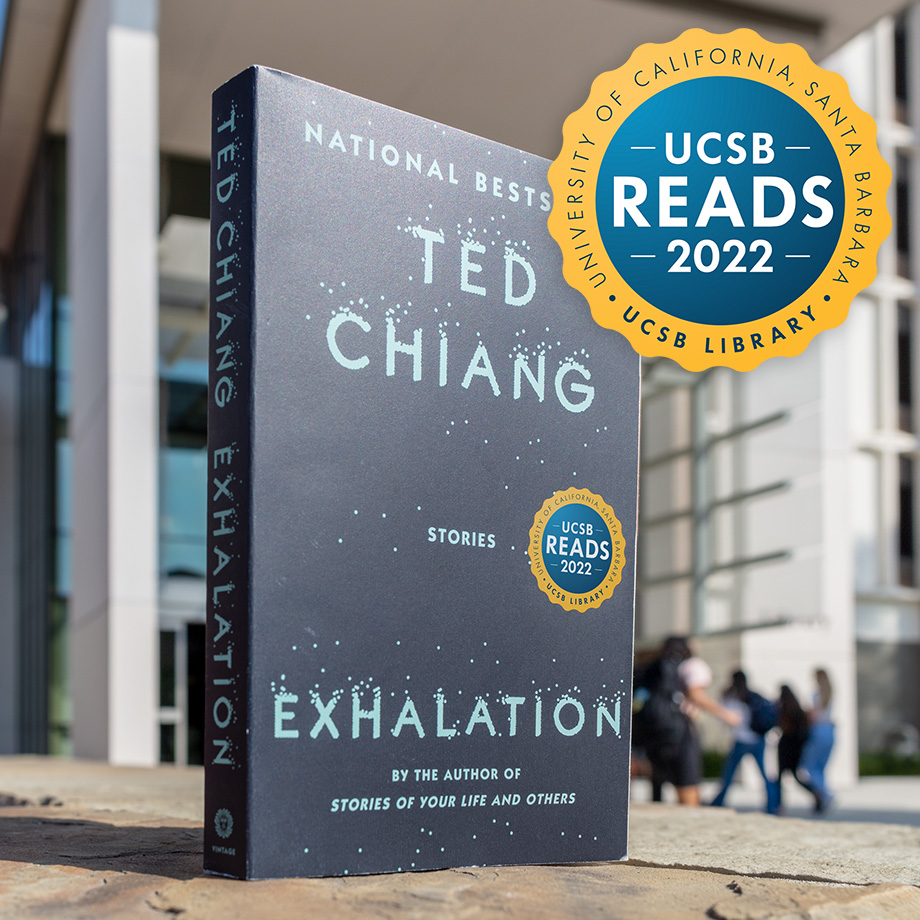 Click here to read an excerpt of the book.

Listen to an excerpt of the book.

Please email UCSBReads@library.ucsb.edu with any questions.

"THE UNIVERSE BEGAN AS AN ENORMOUS BREATH BEING HELD."

In these nine stunningly original, provocative, and poignant stories, Ted Chiang tackles some of humanity’s oldest questions along with new quandaries only he could imagine.

In “The Merchant and the Alchemist’s Gate,” a portal through time forces a fabric seller in ancient Baghdad to grapple with past mistakes and second chances. In “Exhalation,” an alien scientist makes a shocking discovery with ramifications that are literally universal. In “Anxiety Is the Dizziness of Freedom,” the ability to glimpse into alternate universes necessitates a radically new examination of the concepts of choice and free will.

Including stories being published for the first time as well as some of his rare and classic uncollected work, Exhalation is Ted Chiang at his best: profound, sympathetic—revelatory.

Praise for the Book

“Exhalation by Ted Chiang is a collection of short stories that will make you think, grapple with big questions, and feel more human. The best kind of science fiction.”
—Barack Obama, via Facebook

“Illuminating, thrilling. . . . Like such eclectic predecessors as Philip K. Dick, James Tiptree, Jr., Jorge Luis Borges, Ursula K. Le Guin, Margaret Atwood, Haruki Murakami, China Miéville, and Kazuo Ishiguro, Chiang has explored conventional tropes of science fiction in highly unconventional ways. . . . Individual sentences possess the windowpane transparency that George Orwell advocated as a prose ideal. . . . It is both a surprise and a relief to encounter fiction that explores counterfactual worlds like these with . . . ardor and earnestness. . . . Human curiosity, for Chiang, is a nearly divine engine of progress.”
—Joyce Carol Oates, The New Yorker

“Masterful and striking. . . . A fusion of pure intellect and molten emotion. . . . Represents the ideal definition and practice of all science fiction. . . . [Chiang’s] career thus deservedly joins those of only a handful of past masters who likewise did their best work in miniature: Edgar Allan Poe, Harlan Ellison, Ray Bradbury, Theodore Sturgeon. . . . His challenging and rewarding fiction proves that a sizable and appreciative audience exists for the kind of speculative fiction that doesn’t merely offer cosmic explosions, but instead plucks both heartstrings and gray matter in equal measure.”
—Paul Di Filippo, The Washington Post

“Deeply beautiful. . . . These stories are carefully curated into a conversation that comes full circle, after having traversed extraordinary terrain. . . . [Exhalation] is as generous as it is marvelous, and I’m left feeling nothing so much as grateful for it.”
—Amal El-Mohtar, The New York Times Book Review

“A master of the form. [Chiang’s] new collection of nine stories—theming free will and choice, virtual reality and regret—is so provocative, imaginative, and soulful that it makes Black Mirror look drab and dull by comparison.”
—David Canfield, Entertainment Weekly, “The 10 best books of 2019…so far”

“Delirious and exciting as hell . . . [Chiang’s] stories brim with wonder and horror, spectacle and mundanity, philosophy and religion. Tapping into a range of speculative traditions, from pulp and fantasy to the rigorous scientific accuracy of hard sci-fi and the popcorn thrills of soft sci-fi, his work has a profound richness.”
—Stephen Kearse, The Nation

“A handful of living science fiction writers have attained godlike status—N.K. Jemisin, Cixin Liu, and Ann Leckie, to name a few. But Ted Chiang is the only one who’s done it without writing a novel. In fact, he’s published far less than his neighbors on the genre’s current Mount Rushmore, usually just one short story every two years. But oh, his stories. They’re a religious experience. . . . In Exhalation, which could be subtitled ‘Black Mirror For Optimists,’ every story seems crafted with one objective in mind—pure awe. . . . A moving book about fate and free will that is destined to become a literary landmark of the 2010s.”
—Adam Morgan, The A.V. Club

“Exquisite. . . . The stories in Exhalation are a shining example of science fiction at its best. They take both science and humanism deeply seriously.”
—Constance Grady, Vox

“Ted Chiang writes with such a matter-of-fact grace and visionary power that one simply takes on faith that his worlds and his characters exist, whether they are human or robot or parrot; he is the rare author who makes me feel, also, that he believes in his readers, in our integrity and our imagination.”
—Karen Russell, author of Orange World

“Ted Chiang has no contemporary peers when it comes to the short story form. His name deserves to be mentioned in the same breath as Carver, Poe, Borges, and Kafka. Every story is a universe. Every story is a diamond. You will inhale Exhalation in a single, stunned sitting, because true genius doesn’t come along nearly as often as advertised. This is the real thing.”
—Blake Crouch, author of Dark Matter

“Exquisitely crafted. . . . One after another, Chiang’s stories claim their place in your mind until you’re completely swept up in his provocative and at times even charming world. . . . Each story is a carefully considered, finely honed machine. . . . What makes Exhalation particularly brilliant is that not one of the stories feels like it’s designed to be thought-provoking in a stilted, academic way. Chiang is an entertaining, empathetic writer first, before being one of contemporary sci-fi’s intellectual powerhouses, and each story reads that way. . . . [Chiang is] one of the most exciting voices in his field.”
—BookPage (starred review)

“Chiang’s long-awaited second collection. . .continues to explore emotional and metaphysical landscapes with precise and incisive prose. . . . Chiang remains one of the most skilled stylists in sf, and this will appear to genre and literary-fiction fans alike.”
—Booklist (starred review)

“An instant classic. . . . Visionary speculative stories that will change the way readers see themselves and the world around them: This book delivers in a big way.”
—Kirkus Reviews (starred review)

“Chiang is always thought provoking, and his latest collection is no exception.”
—Library Journal (starred review)