Modes of Codex: The Art of the Book from Medieval Fragments to Movable Type and Fine Press Printing: Artist Books 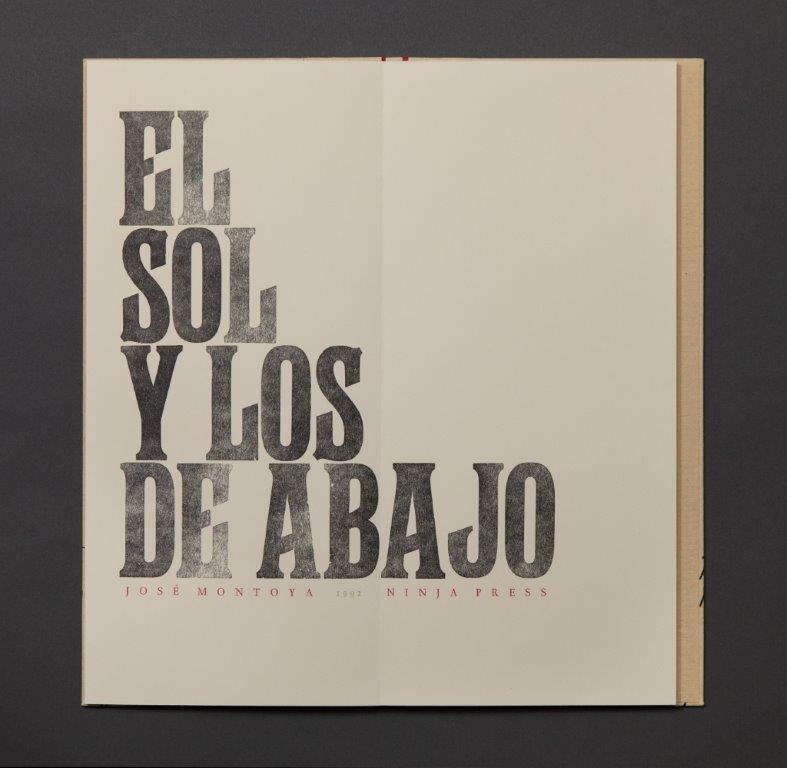 José Montoya (1923-2013) was a poet, artist, and social activist who grew up in California. He worked as a farm laborer as a boy, and earned his M.F.A. from CSU Sacramento, where he later taught. In 2002 Montoya was named the poet laureate of Sacramento. The drawings, taken from the poet’s sketchbooks, are printed from zinc plates, and augmented by hand-painted embellishments. Design, presswork, and binding are by Carolee Campbell, Ninja Press. 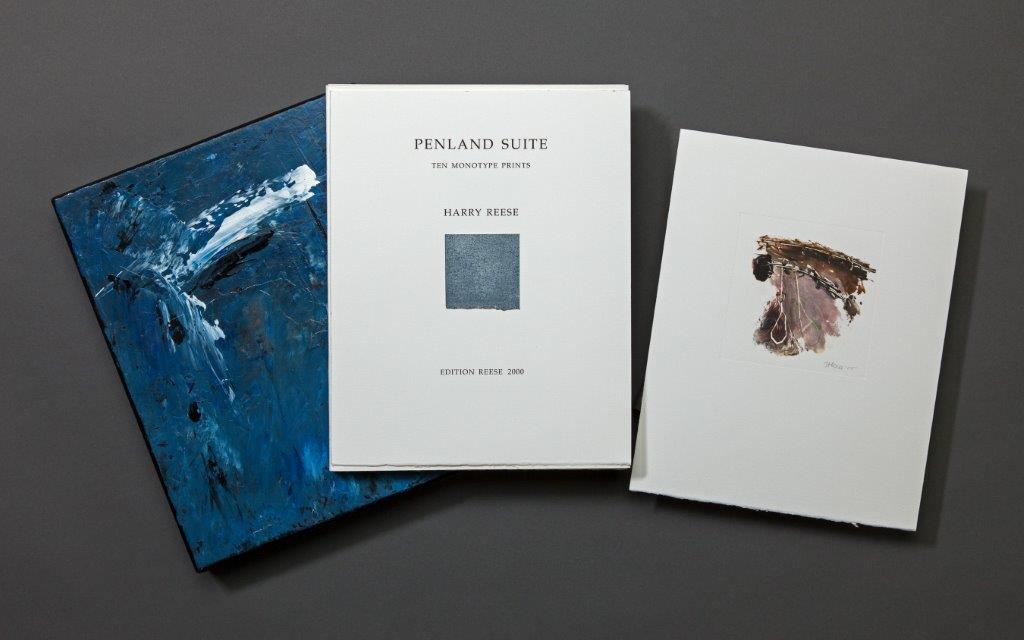 Penland Suite was produced by Harry Reese in fall 2000 at the Penland School of Crafts in North Carolina during his residency as a visiting artist. This limited edition includes 10 monotype prints that are loosely gathered in a paper wrapper, or chemise, binding. 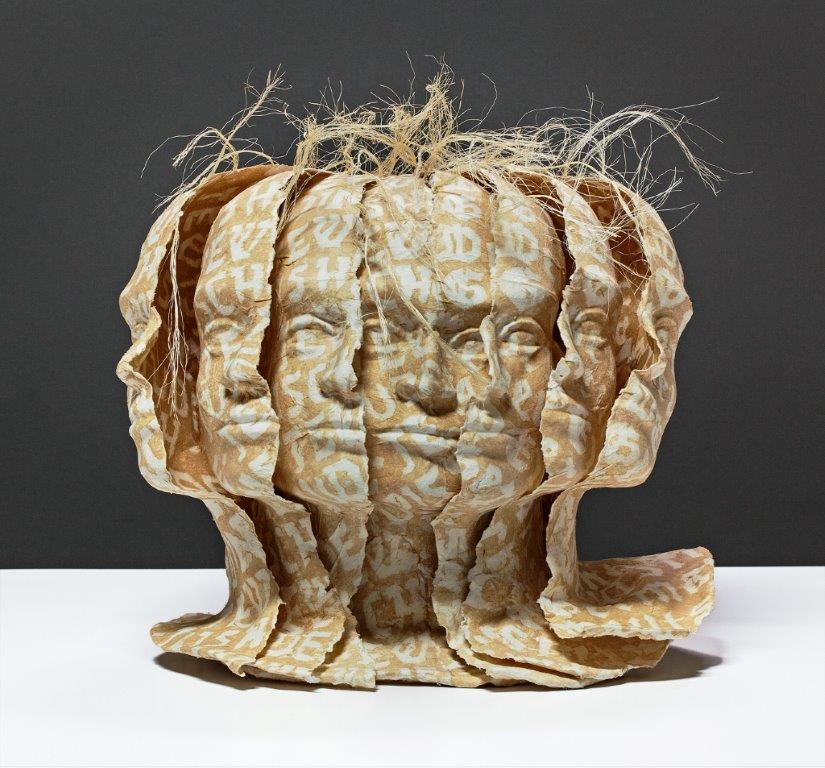 Karen Baldner grew up in West Germany in a Jewish family that survived the terror of Nazi Germany. She received an M.F.A. in printmaking from Indiana University, Bloomington, and teaches book arts at Indiana University in Indianapolis. In this representation, Baldner presents a duality of opposites: A German and a Jew coexist. Four sets of layered portraits stenciled with text are threaded together to resemble the structure of a book. 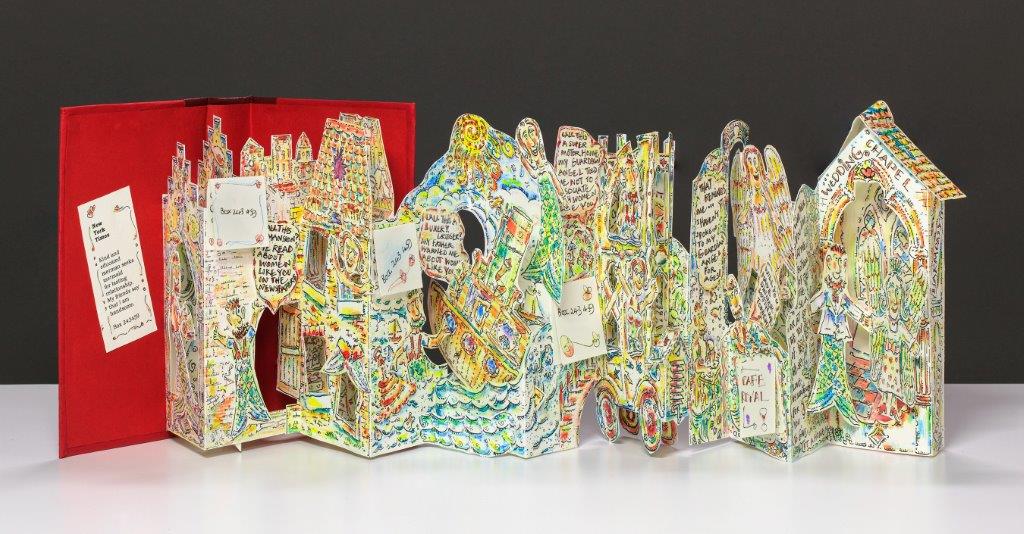 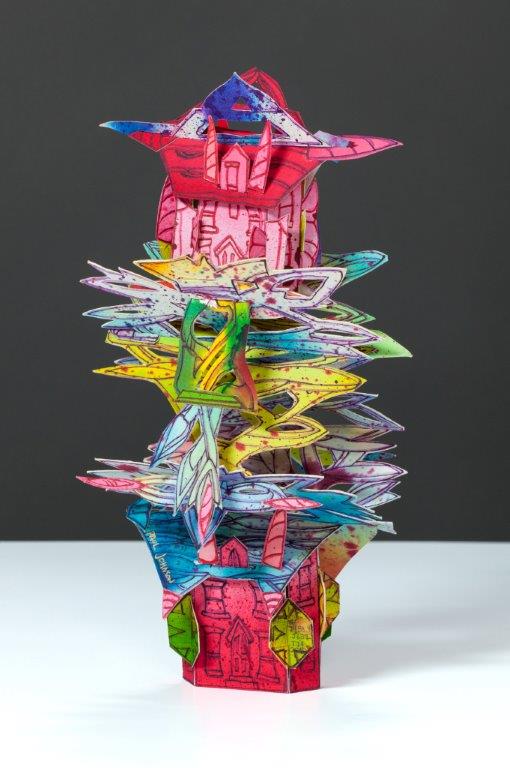 Paul Johnson is internationally known as a pioneer in book art literacy — teaching children how to construct movable and pop-up book forms. He produces unique pop-up pieces without folds and uses several different types of paper hinges. He also uses fabric dyes on molds made with watercolor paper to construct movable books. His work is motivated by medieval illuminated manuscripts and Japanese art, specifically the woodblock art of Hiroshige and Hokusai. 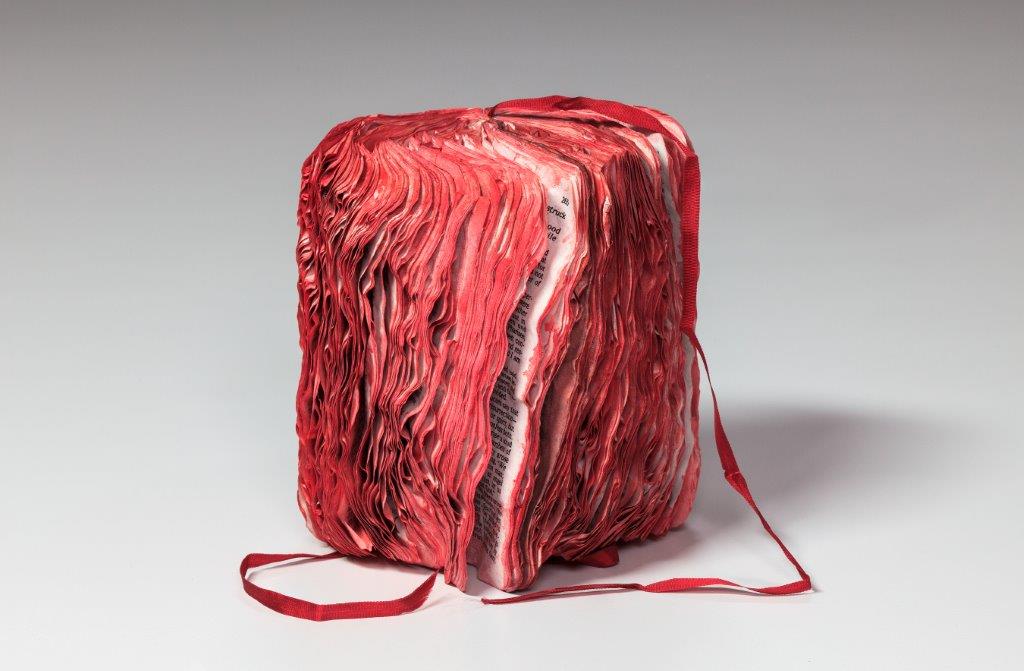 Ekstrom uses books and Bibles as her primary art materials, and draws on techniques of cutting, shredding, wrapping, and tying as ways to engage with sacred text. In this a one-of-a-kind book, she has altered a New Testament Bible with red paint on the pages and top edges to produce a deckled, swollen appearance similar to that of a paper flower.

Mary Heebner A Sacred Geography; Sonnets of the Himalaya and Tibet (2005) 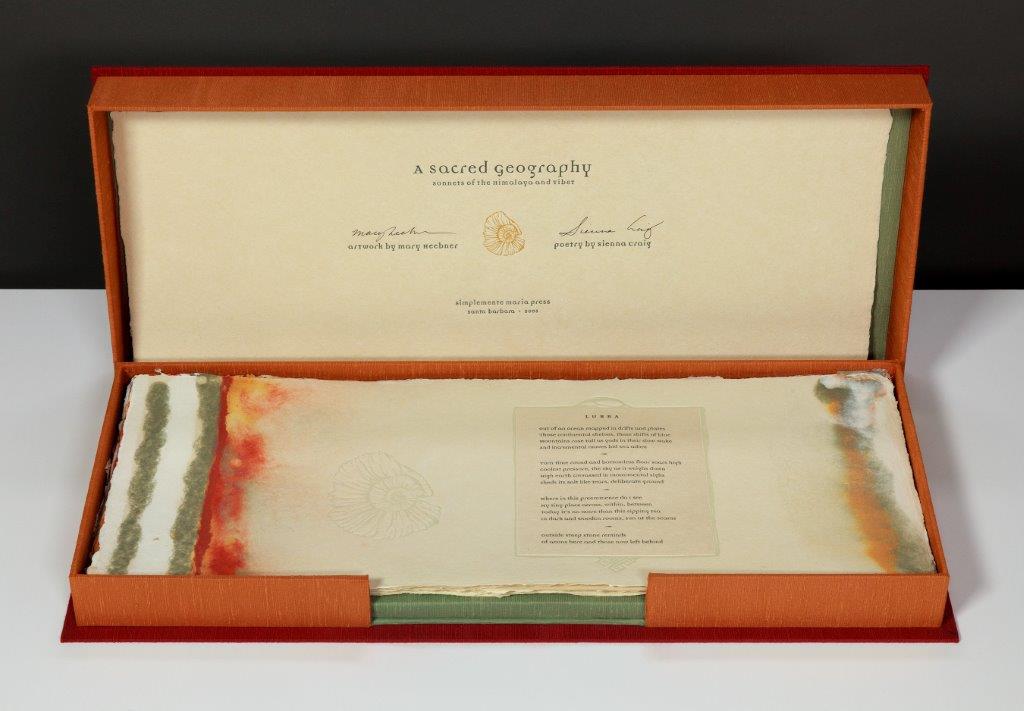 A Sacred Geography is a collaboration with her daughter, Sienna Craig, featuring poetry and art commemorating their trip to the Himalayas and Tibet. The book is dedicated to Heebner’s granddaughter, Aida Claire, daughter of Sienna Craig.

Mary Heebner, founder of Simplemente Maria Press, is a book artist trained in the art of papermaking. Heebner’s exposure to different mythologies and archaeological findings led her to explore the physical world in the context of cultural forms. 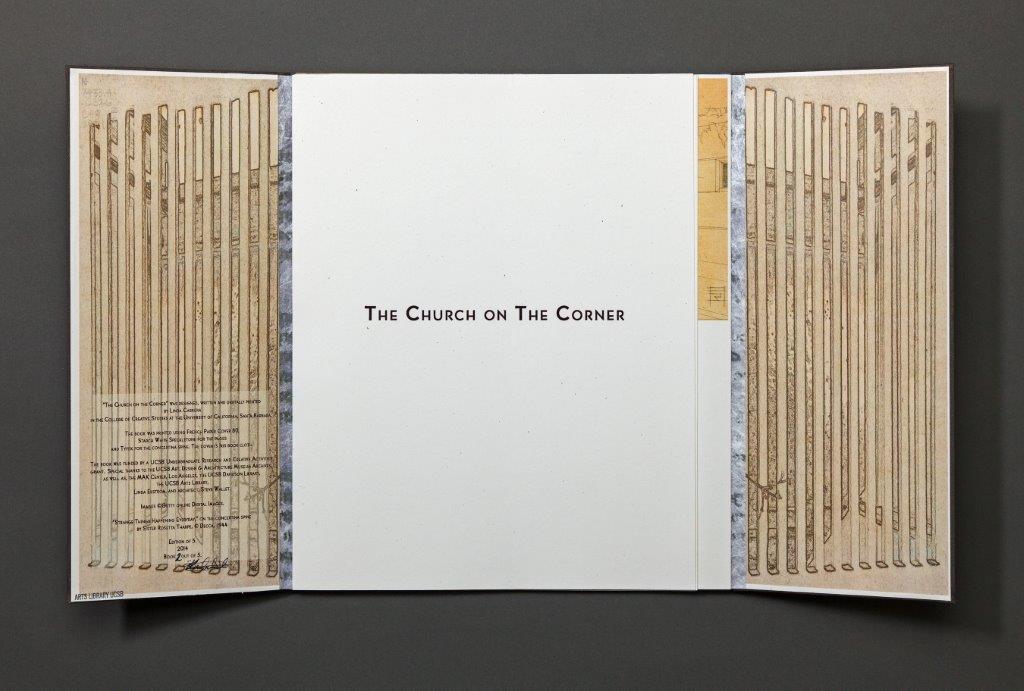 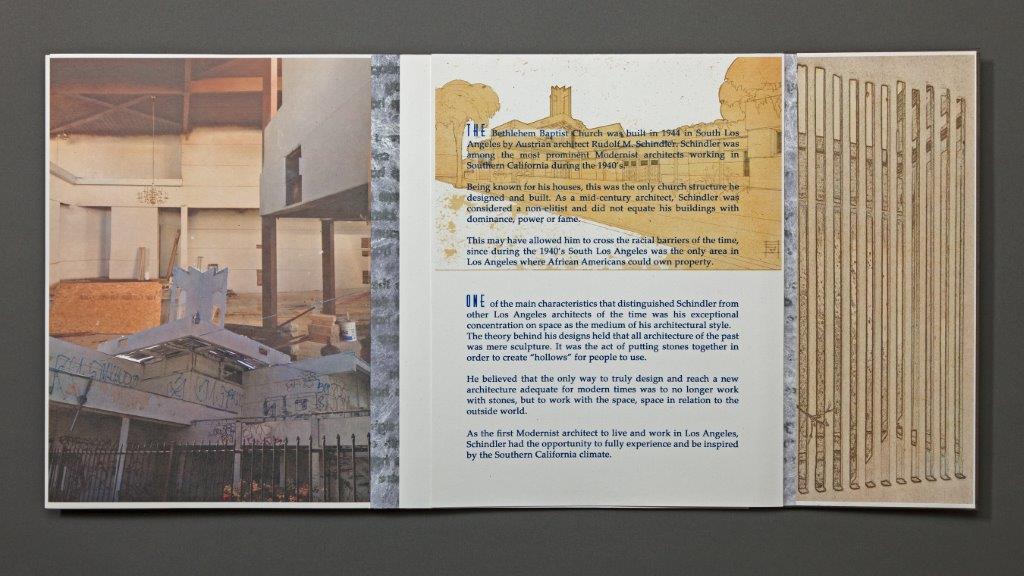 Linda C. Cabrera
The Church on the Corner
2014 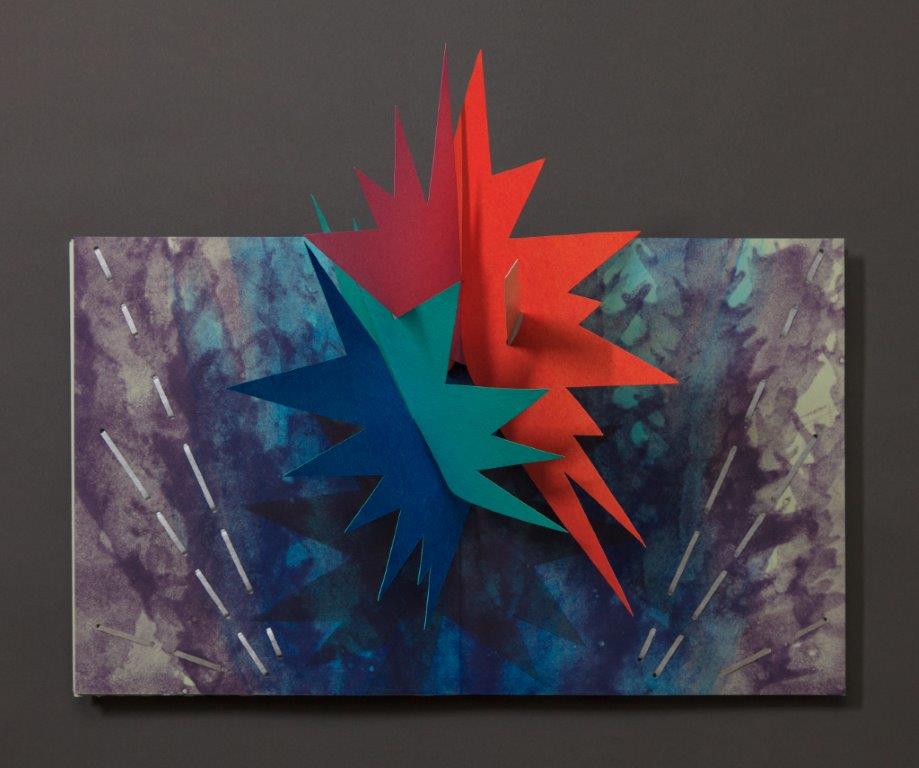 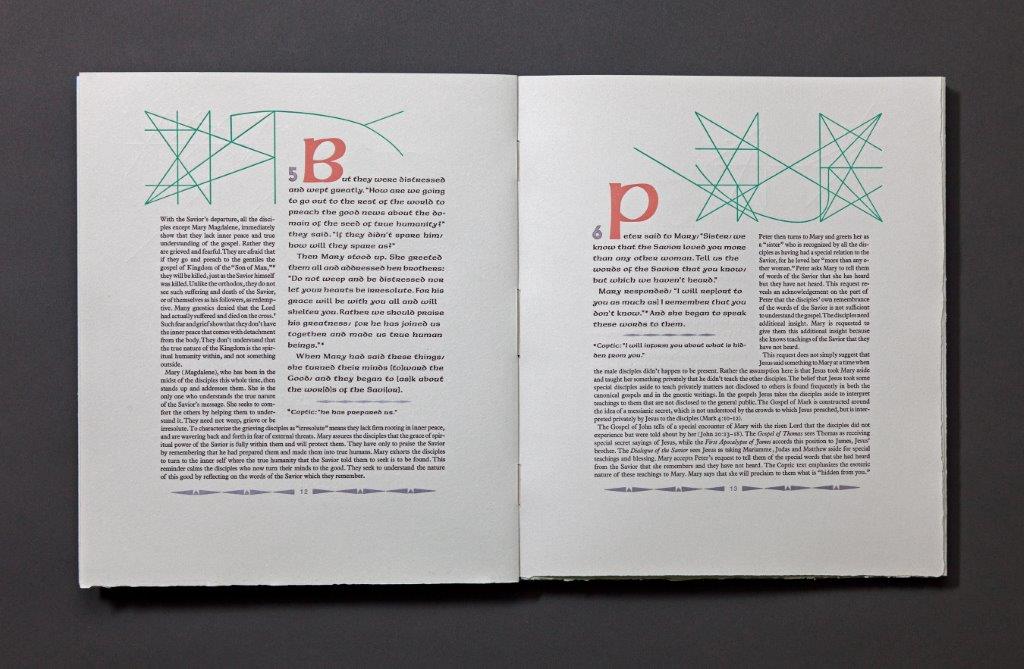 The Gospel of Mary, translated from Greek to English by Karen Leigh King, with commentaries by Rosemary Radford Reuther, is taken from the Scholars Version translation published in The Complete Gospels. King is the first woman appointed as the Hollis Professor of Divinity at Harvard Divinity School. The book is housed in a wooden birch tray clamshell box and contains a dynamic pop-up element inspired by Gospel symmetric imagery. The cover and center pop-up were painted by Claire Van Vliet with Katie MacGregor, who also made the pop-up papers. 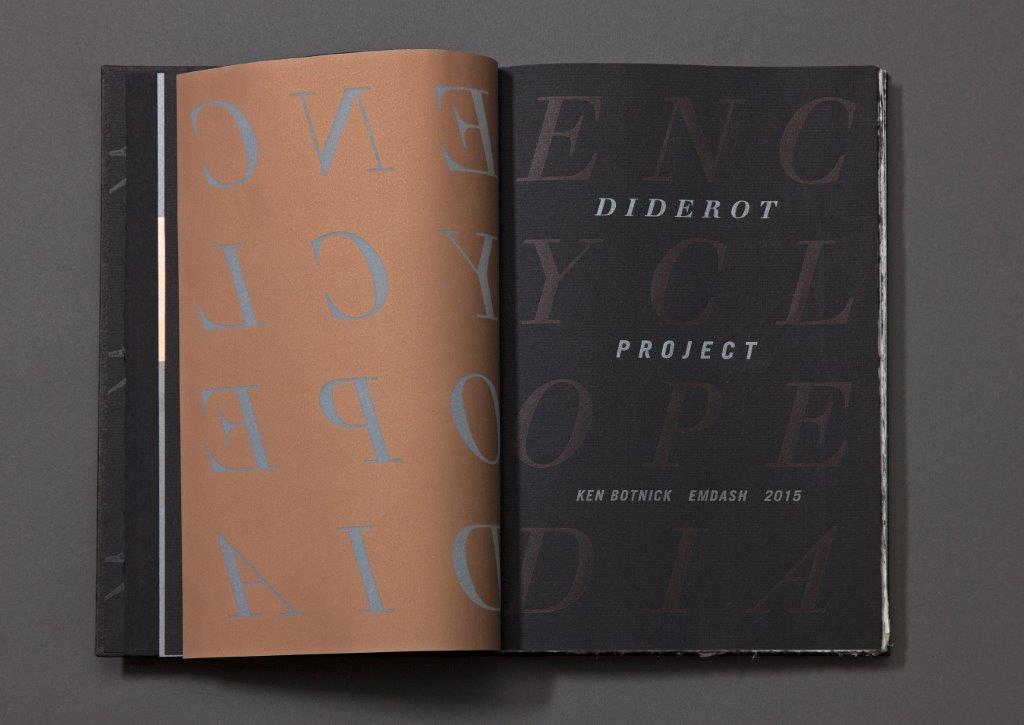 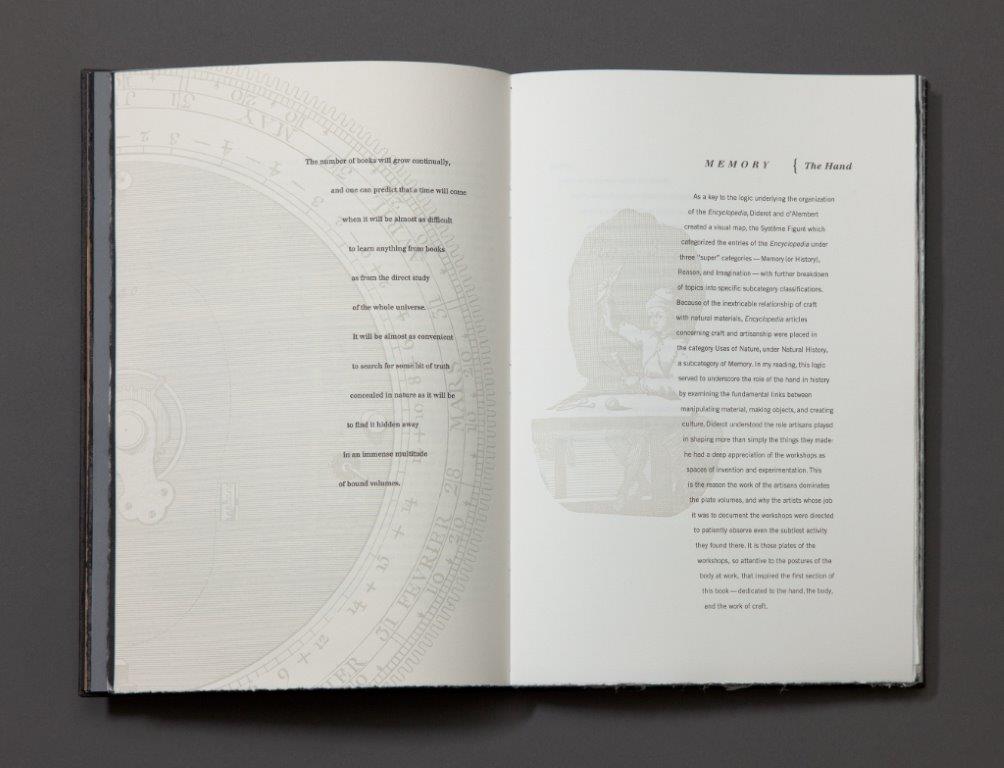 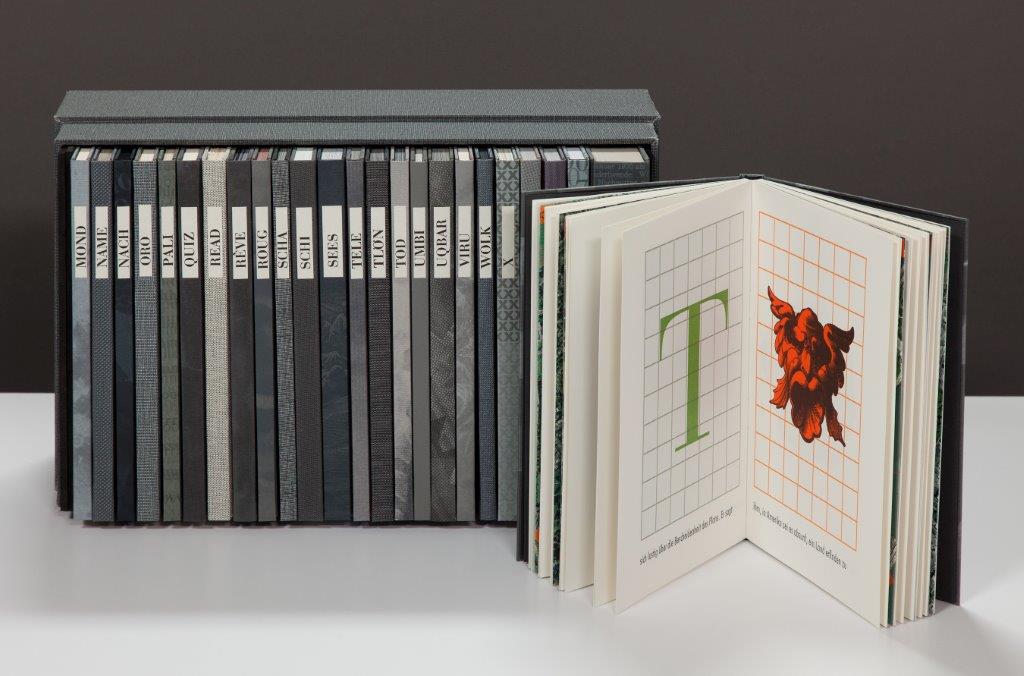 Diderot Project is a letterpress print designed as a visual and textual meditation on concepts encountered in the Encyclopédie of Diderot. Botnick’s work combines 28 volumes of Encyclopédie plates and texts bound together by handmade flax paper dyed in indigo. The book also provides a physiological exploration into the practice of writing and the effects crafts have on our cognitive perception. Botnick is a professor of art at Washington University in St. Louis Missouri and in 2015 won the Minnesota Center for the Book Arts prize. 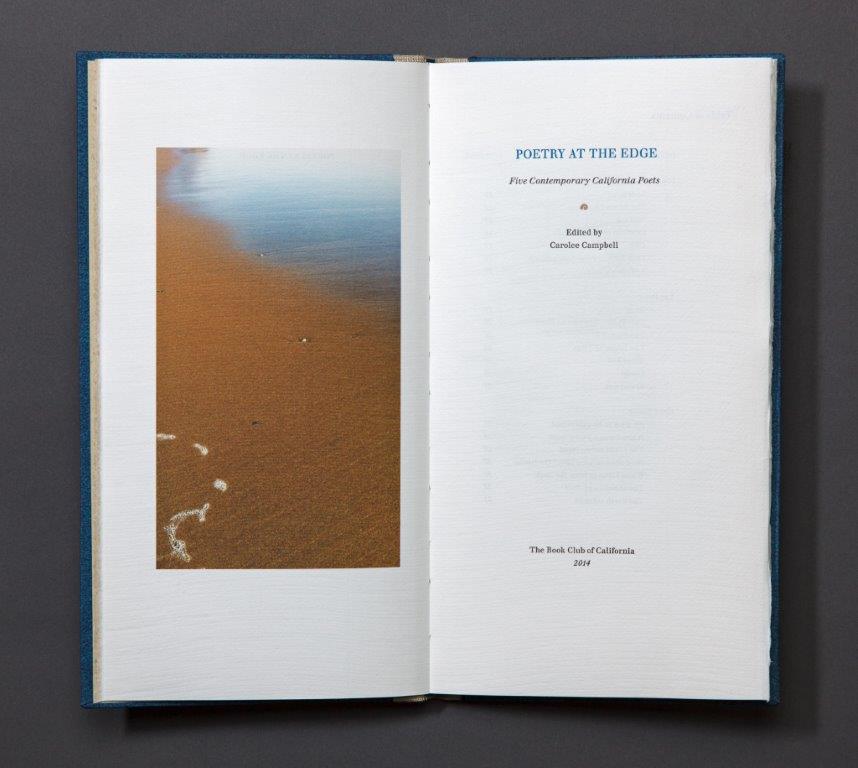 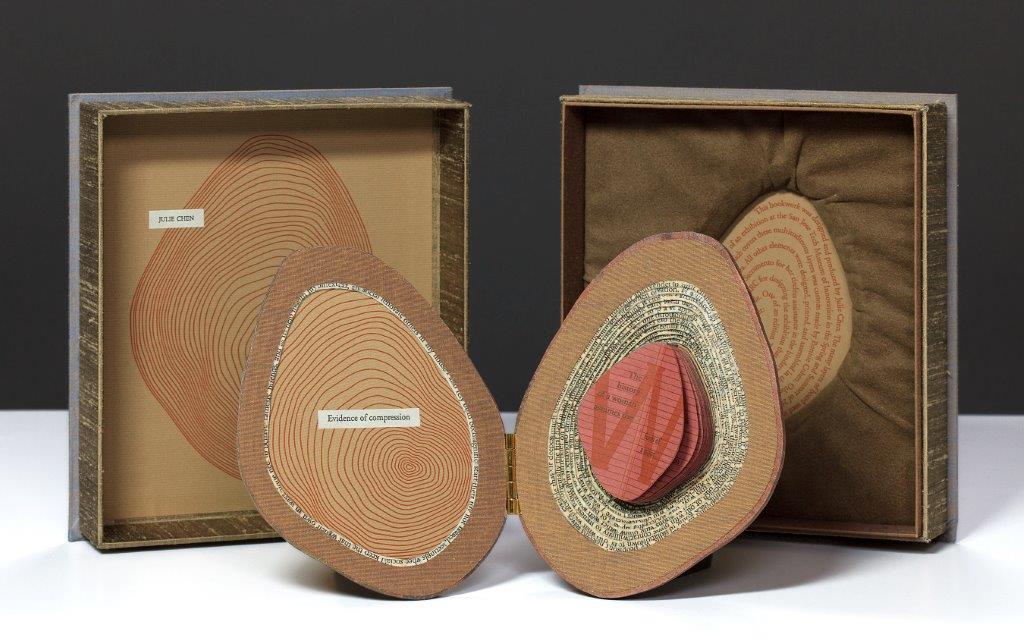 Book artist and fine press printer Julie Chen (1963-) received her M.F.A. from Mills College in 1989 and established Flying Fish Press in 1987. She focuses on three- dimensional, movable book structures and fine letterpress printing. She blends letterpress and handmade bookmaking with digital technologies to create a complex representation of the physical book as art.

Chen’s approach as a book artist is “...rooted in the ideas of the book as a physical object and a time-based medium. I view reading as an intimate act in which the reader must be in close physical proximity to the book, can control the pace of reading through the self-directed turning of pages, or equivalent action, and must interact with the book through the manipulation of the book’s physical structure.” Her book structures draw on the use of mapping, charting, and numbering as a means of giving order to personal experience through book art. 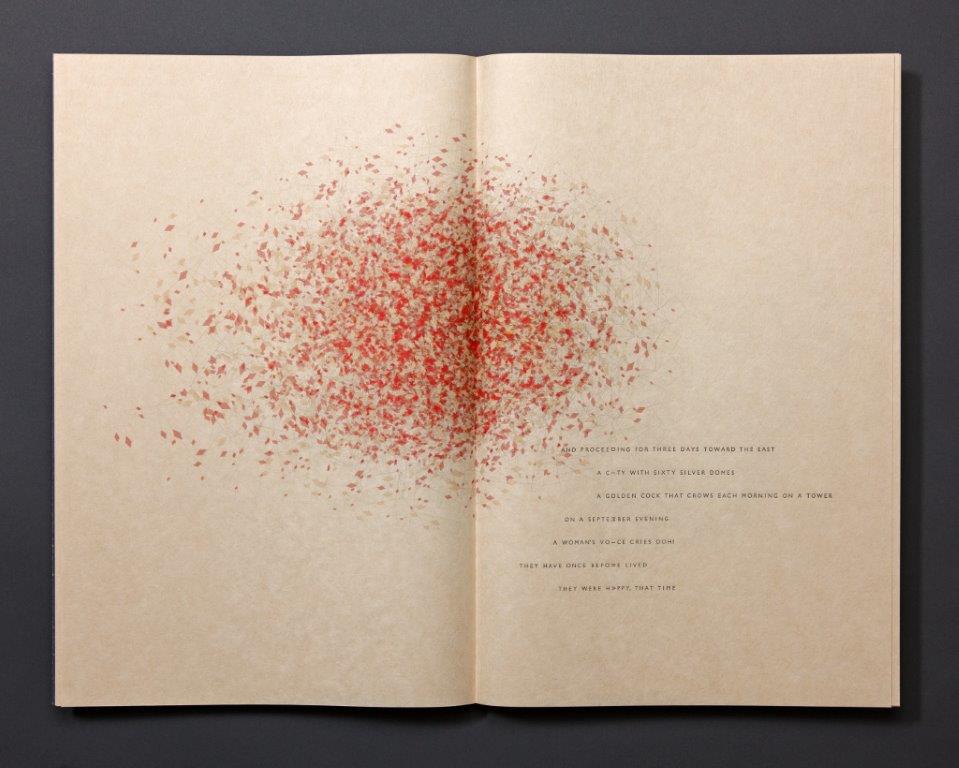 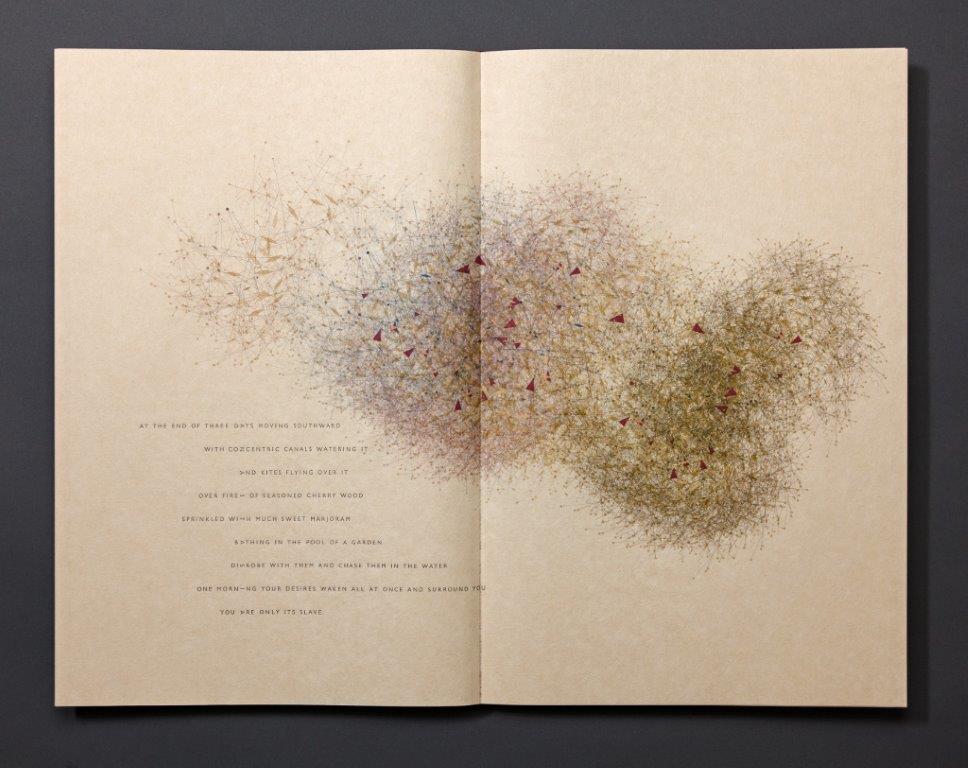 Invisible Cities is a digitally generated artist book created to venerate Italo Calvino’s novel as translated by William Weaver; the mesostics of John Cage; the galactic tides of Alar and Juri Toomre; the typography of Iliazd; and an original poetic concept by Jean-Pierre Hébert (1939-). Hébert, an independent artist of algorithmic art, poeticized Calvino’s narrative to compose the digital drawings featured in the book. The platonic forms are inspired by theories of fluid dynamics. The print and digital media are inspired by the action or process of thinking and the psychological effects of mind stimulation. The arrangement and printed letterpress are by Sandra and Harry Reese, and the drawings by Jean-Pierre Hébert on Niyodo Natural paper with an Epson Stylus Pro 4800. The handmade paper and cover are by Sandra Reese. 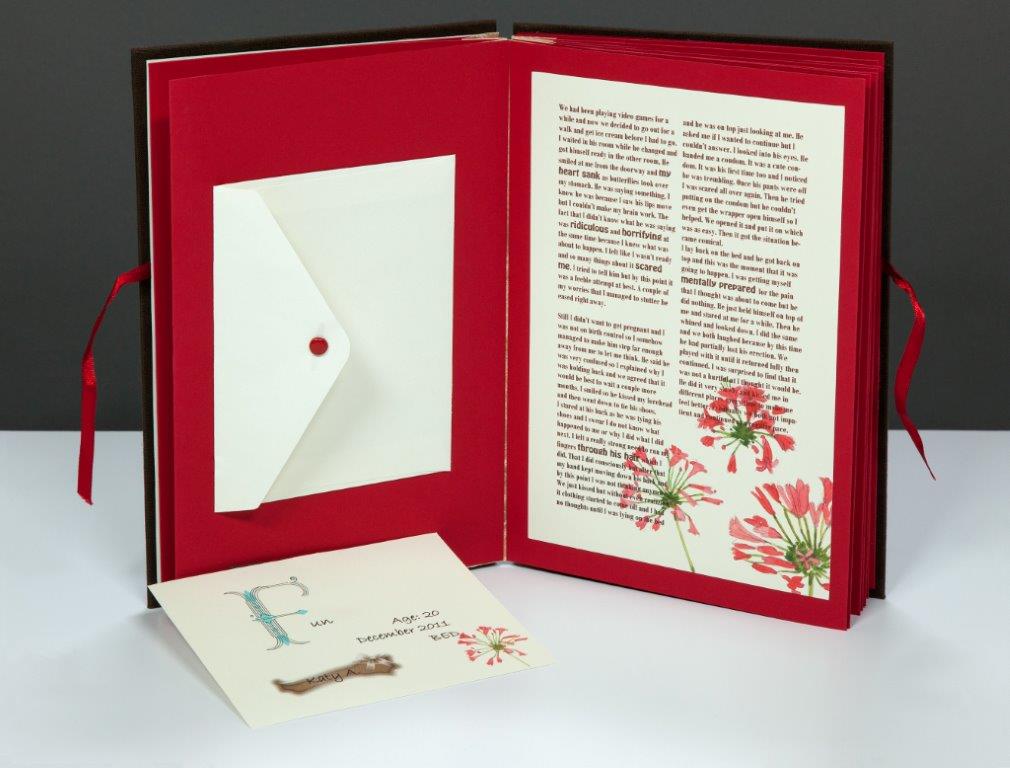 Linda C. Cabrera, a 2014 UCSB College of Create Studies Graduate, produced this multi-voice narrative of the sexual awakening of young people. Each one- page story describes how a different young man or woman lost his or her virginity, and includes additional text inserted into an envelope. As described by Cabrera, Besmirched is “an attempt to allow the reader to see that this is something that happens to everyone, whether at the ‘right’ time or not, to liberate this subject [and make] it less taboo.”