Modes of Codex: The Art of the Book from Medieval Fragments to Movable Type and Fine Press Printing: The Gutenberg Revolution

The first substantial book to be printed with movable type in the West, the Gutenberg Bible was a critical achievement of its time. Johannes Gutenberg is credited with inventing the punch matrix system, which allowed multiple identical alphabetical characters to be cast from the same matrix, or mold. This new process accelerated the printing process considerable, as printed books were previously engraved page by page, which would have made the printing of a large work such as the Bible impossible.

Another notable advancement of Gutenberg’s printing was oil-based ink, which adhered better to metal type. The ink’s distinctive glittering surface is due to its high metal content of copper, lead, and titanium.

Patrons sent their printed Bibles to be rubricated with red letters for emphasis and illuminated with elaborately decorated capital letters, resulting in variations among the finished Bibles. The fascimil leaves here reflect these differences. Most copies printed on paper, although a few were printed on vellum (calfskin).

Gutenberg’s printing process revolutionized the spread of knowledge and literacy by making it possible to produce many accurate copies of a single work, thus shaping the Renaissance, the Scientific Age, and the Protestant Reformation, and was the precursor to mass production of the book.

Very little is known about Gutenberg (1398-1468), born in the German city of Mainz into an aristocratic family of skilled metal craftsman. 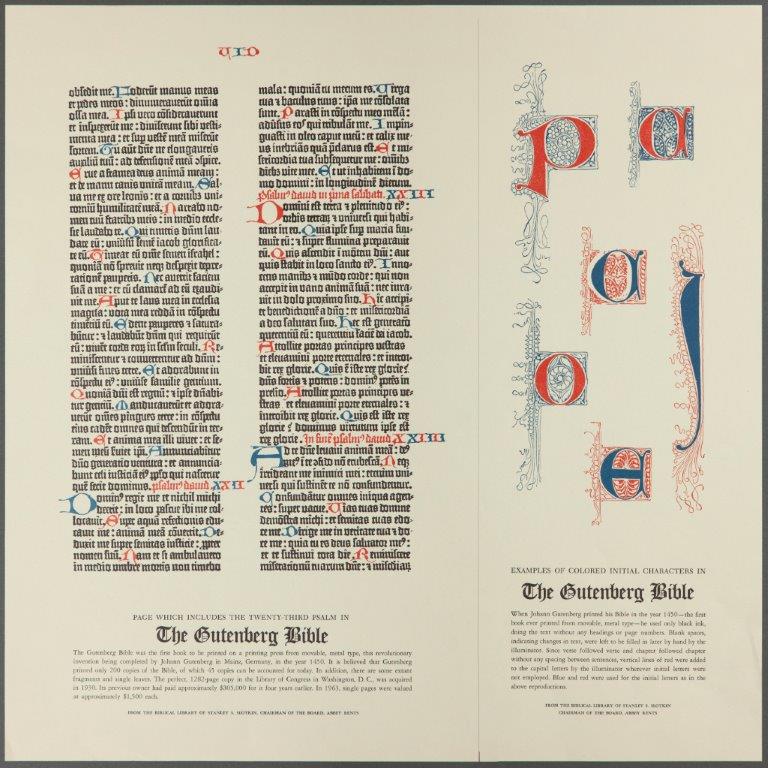 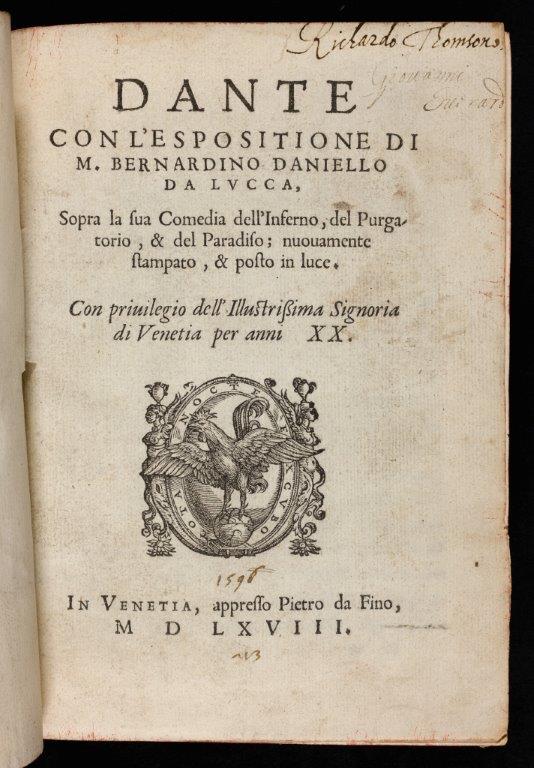 This 16th-century book is an original copy of Dante Alighieri’s (1265-1321) Divine Comedy, comprising all three sections, which convey the author’s travels through the kingdoms of Inferno, Purgatorio, and Paradiso. The book also contains commentaries and dissertations by Bernardino Daniello, an Italian scholar whose criticism was greatly discredited by Italians. 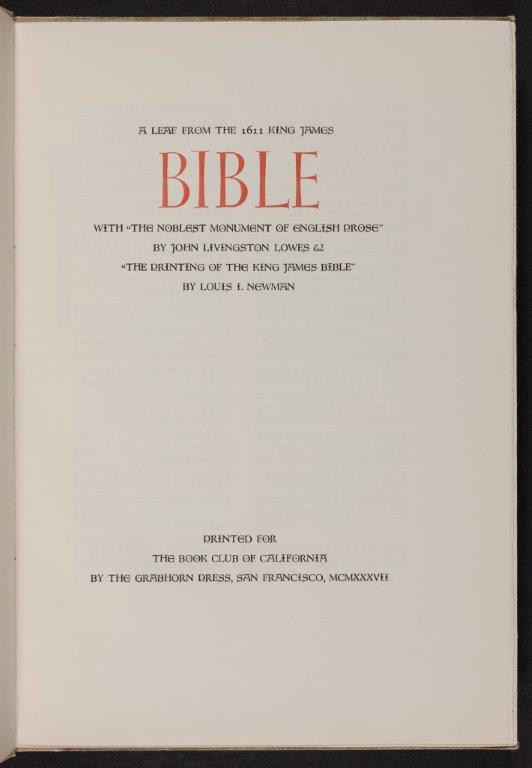 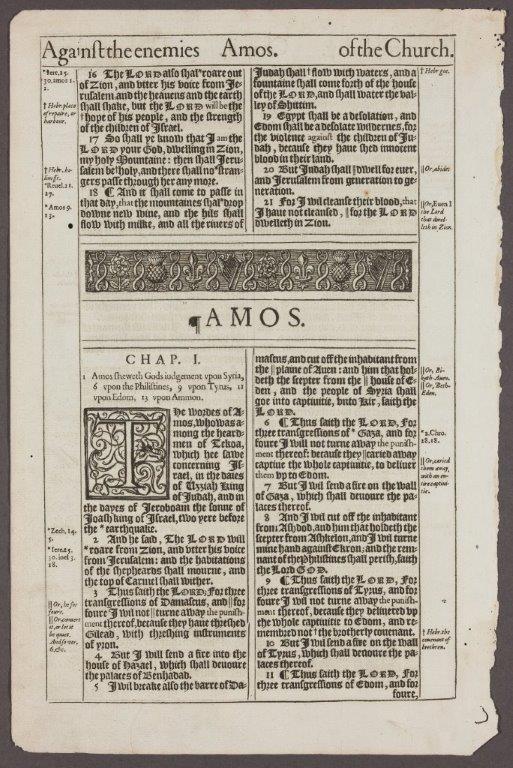 This original leaf is from the first edition of the authorized version of the 1611 King James Bible. Religious scholars and linguists appointed by King James I of England were authorized to translate Masoretic (Hebrew Old Testament) and Septuagint (Greek translation of Hebrew Bible) text into the common English language. The King James Bible replaced the Bishops’ Bible and Geneva Bible previously approved by English Church authorities. 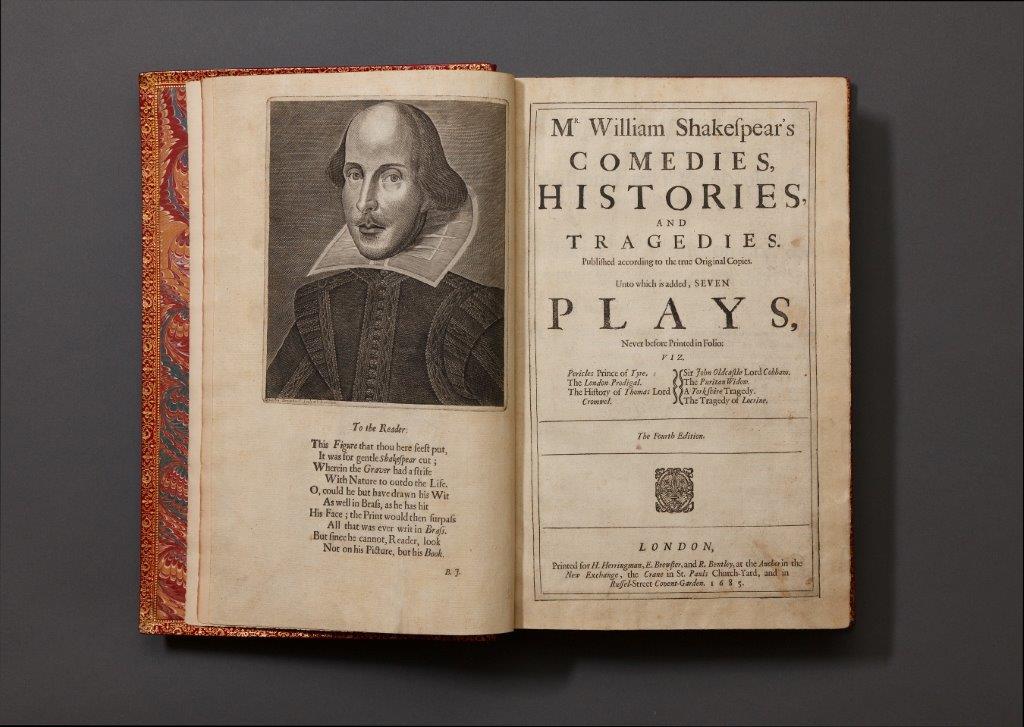 Shakespeare’s Fourth Folio, printed on Dutch Demy Royal sheets, contains seven plays that were not added to the first three editions of the original copies. This edition also features John Milton’s first published poem, “An Epitaph on the Admirable Dramatic Poet, William Shakespeare.” Unlike the first three copies, the Fourth Folio is recognized for its modernized text and is larger in size. The format present in the 1685 edition was adapted by such editors as Nicholas Rowe, who used this version as the basis for his 1709 edition. The Fourth Folio was the last Shakespearean manuscript printed during the 17th century. Publication of plays was not intended to bring social esteem to playwrights — manuscripts were to be performed rather than read, so Shakespearean scripts were not regularly printed and marketed.

Mass Production of the Book

By the 19th century, advances in the mechanization of the printing press increased and affordability and accessibility of books and other formats. Mass publishing emerged from interplay between advances in technology and social change.

The appeal of popular literature and the sale of mass-produced books started in the 1830’s and continued throughout the 20th century, leading to a high demand for all print formats and a growing literacy rate. A switch from the platen press (which pressed flat type on paper) to the cylinder press (which rolled type over the surface of the paper) helped meet the scale of demand for the printed word in all formats. Examples include mass distribution of newspapers, periodicals, magazines, and books – some highly illustrated and others cheaply produced, such as “penny dreadful” books and dime-store novels

During the 20th century across Europe and North America, the bookselling profession matured with the formation of professional book associations, including the American Booksellers Association (ABA), founded in 1900. 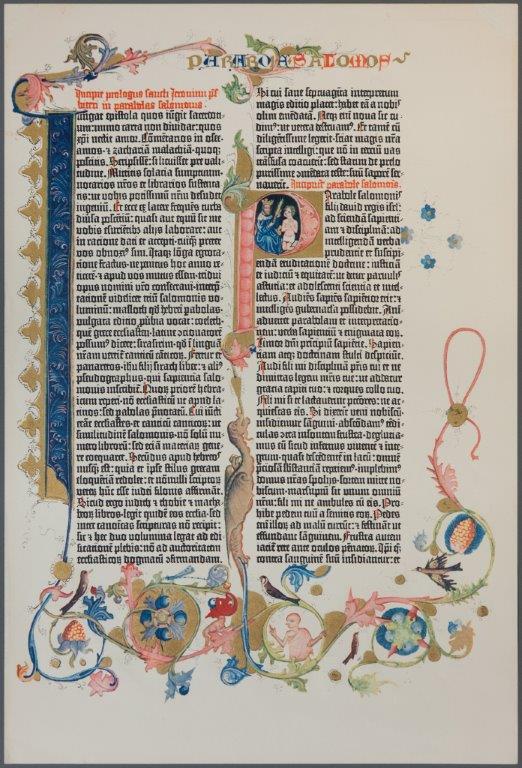 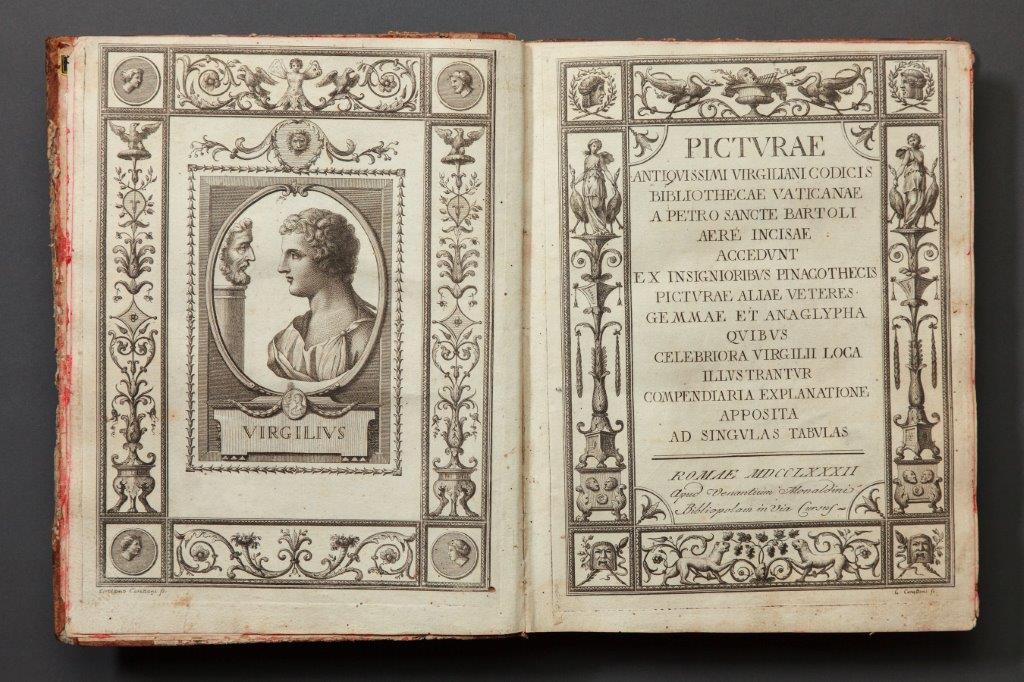 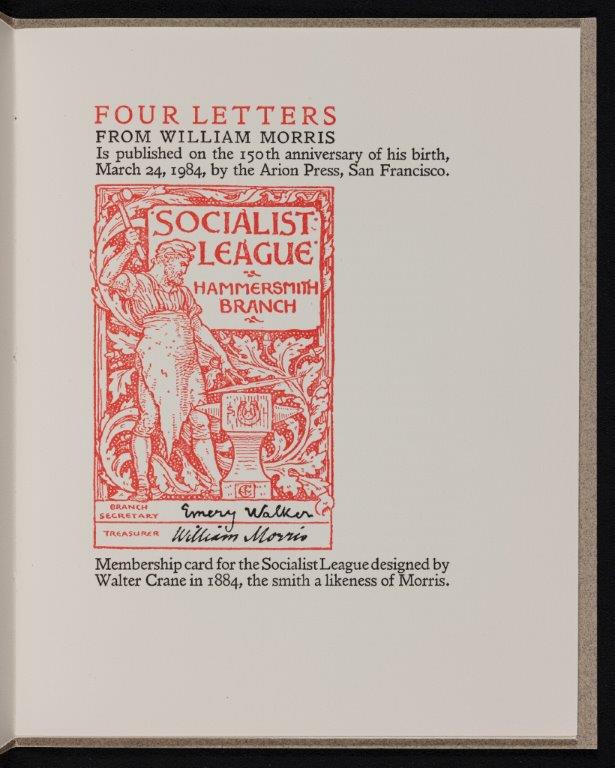 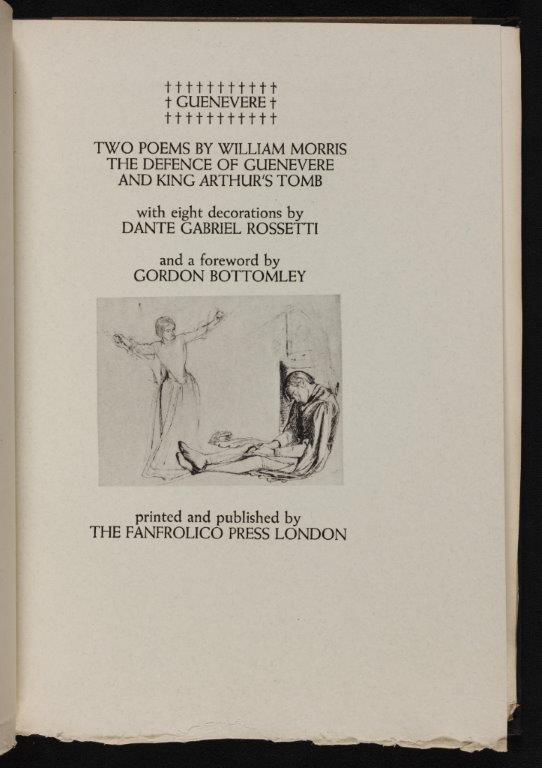 Bottom: William Morris
from The Defense of Guinevere and other Poems
1904

In Victorian England, William Morris (1834- 1896), best known for his contributions to the British Arts and Crafts Movement, was a textile designer, translator, poet, novelist, printer, and founder of the Socialist League. He designed three typefaces for Kelmscott Press, which he founded in 1891, as well as 50 borders and ornamentations used in fine press printing. Kelmscott Press produced 23 of his books as well as the works of Keats, Shelley, Ruskin, and the magnum opus Kelmscott Chaucer, which took four years (1892-1896) to complete. 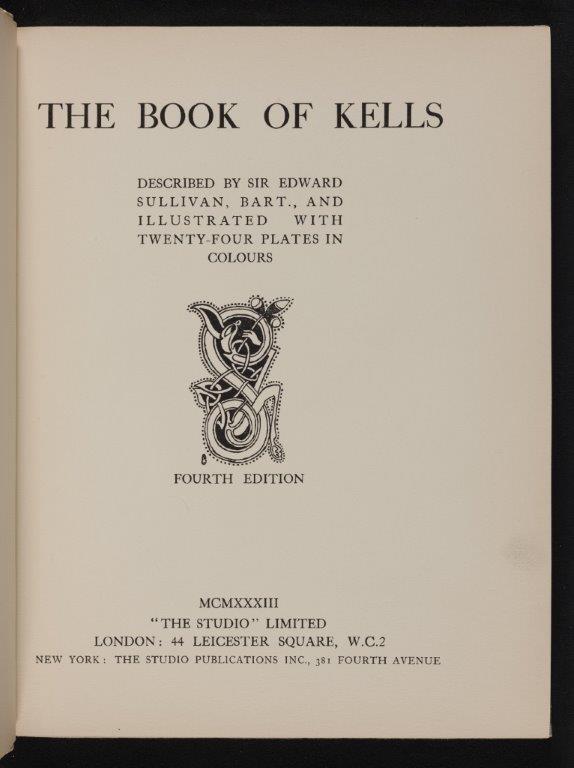 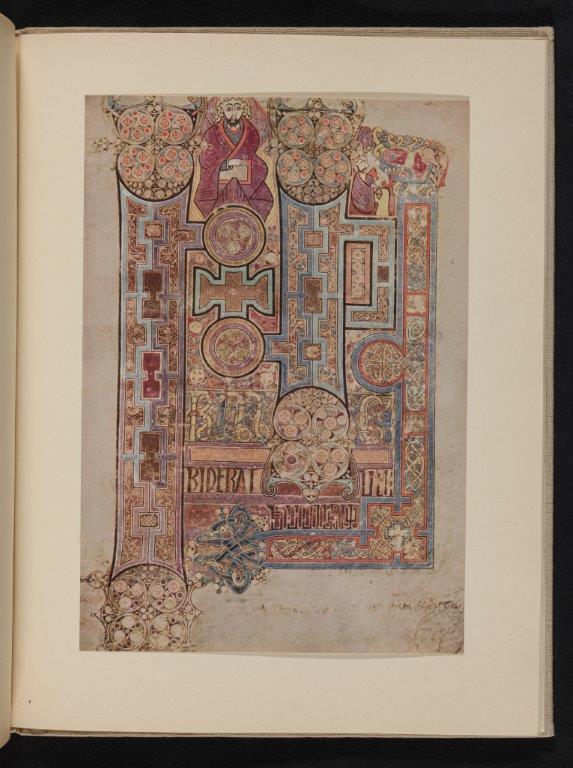 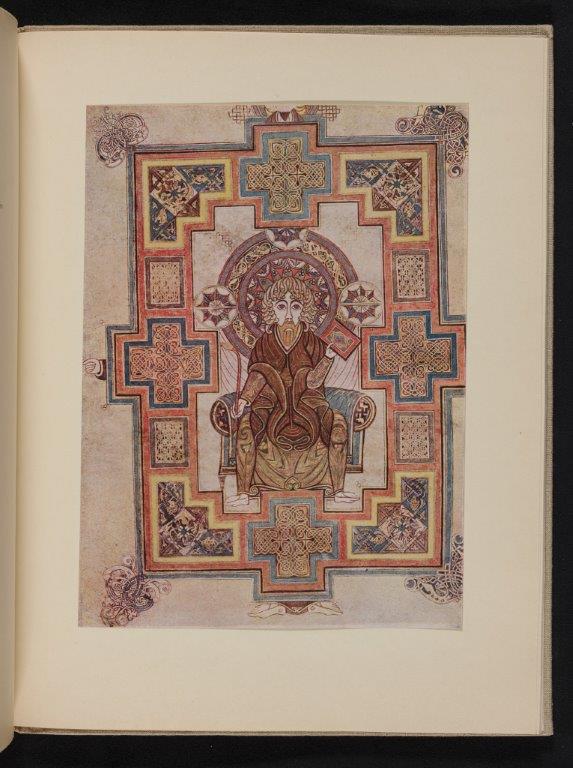 The Book of Kells
Fourth Edition, 1933